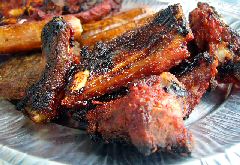 I love to eat. Look at any picture of me from about 1996 and later and it’s obvious that this is true. And one of my favorite foods, especially during the summer, when it’s warm outside and the grill is going almost every evening, is ribs.

Ribs are not exactly dignified. You’re not likely to get ribs when you go to one of those places that makes you pretend you know which of the sixteen forks and spoons you’re supposed to use. Ribs are finger food. Some really good rib joints – and good ones are rib joints, not rib restaurants – even give you a bib, because good ribs are messy, coated with barbecue sauce, the recipes for which are closely-guarded secrets. Thick, rich, zesty, spicy, tangy, smoky and slightly caramelized from slow broiling over the coals.

And if you’re eating them the right way, with your hands on opposite ends of the bone and taking deep, meaty bites, you’re going to have to lick the sauce off your fingers, because you’re going to get some on you.

I take you down this culinary path, not to make you hungry or to give hints to my wife as to my dinner preference for the Fourth of July. I use the analogy because during one of my recent quiet times, that phrase passed through my mind when referring to my recent personal spiritual revival. Recently it’s been obvious to some of the people I work with that something’s going on with me. So, I explained it; explained that the week in Iowa really transformed me; explained that I had experienced something so powerful that it couldn’t help change me. Then I nearly said, “Don’t worry, I won’t get any on you.” However, at the last minute, in a moment of divine intervention, the words changed. It wasn’t because I was thinking about what I was saying. Ask my wife; she’ll back me up. I haven’t mastered that particular skill.

Instead, the words “Don’t worry, I won’t bash you over the head with it” were placed in my mouth.

I spent the rest of the day quietly trying to figure out why it had happened, since the how (God’s intervention) seemed fairly obvious.

I began pondering the previous week’s experiences, trying to determine if they were the source of this particular puzzlement. The memories came flooding back from the week at work camp like movies on a reel; the evening programs, the daily work site devotionals, the evening youth group devotionals. It became apparent to me: my change was caused by having been fully awash in God’s presence for a full week. I was not alone; everywhere I looked, there was God, in the people I had traveled with, to the people I worked with all week on my crew, to the woman whose home we helped restore. In some ways, God’s presence was obvious and intentional, such as the Tuesday and Thursday programs where we visited the Transformation Stations or the Stations of the Cross. My daily discussions with my friend Gary were also obvious, visible manifestations of God’s presence. So were the daily devotionals with the kids in our youth group. The obvious “God sightings” were moving. So were the not-so-obvious ones; the gradual changes in attitude of some of the kids I worked and roomed with over the course of the week.

Finally, the scripture came to me, from : “Nor do men light a lamp and put it under a bushel, but on a stand, and it gives light to all in the house.” I had been awash in the light of our Savior for an entire week. Jesus commanded his disciples not just to be the light of the world, but to let their light shine. It was my time to shine; to put spiritual barbecue sauce all over my world as I know it and encourage those around me to roll up their sleeves and get messy. To “get it on you” in the same way I had it on me. To metaphorically lick it off my fingers with a smile on my face.