Luke is my  youngest son and the fourth of my five children, born in 2003. His was not a normal pregnancy or early infancy. My wife, Trisa, suffered a ruptured appendix at 32 weeks. It was after the surgeon successfully performed the operation that he informed me that the mortality rate for mother and child was 85% at this late term. Before the procedure, he did warn us that there was a strong chance he would be forced to deliver Luke while performing the appendectomy, though luckily – or, perhaps, not – it was not necessary.

After a normal surgical recovery, Trisa went full-term before giving birth to Luke during a normal delivery. However, normal was short-lived. Luke was born with no suck reflex and dropped a significant amount of weight. Daily observation by the hospital’s outstanding lactation staff allowed his condition to be identified quickly; we began to feed him by guiding a rubber cannula connected to the end of a plastic syringe into his mouth with one of our fingers, slowly injecting mother’s milk and formula into his mouth while using our fingertips to stimulate the roof of his mouth and helping him to learn to suckle.

Luke continued to miss developmental milestones. He didn’t begin to sit up on his own until nearly nine months. He could not crawl until he was about one year of age. At 19 months he finally began some very wobbly walking. Regular milestone checkups with our pediatrician began to elicit concern until she finally asked if we had considered seeing a developmental specialist.

Luke was diagnosed on the Autism spectrum at 24 months. At the time, he was tested to be 9-12 months behind the “norm”. He had a vocabulary of less than 10 words – many of which only my wife and I could understand – and played by spinning his toys or lining them up in rows. Socializing meant he played near other children, rarely interacting. Pretend play was beyond his understanding.

Luke started school in September of 2005. He spent half-days, five days per week, in an ECSE classroom with four to six other kids. At the time, all were boys – statistically, one out of every 70 boys will be identified as having an autism spectrum disorder.

In addition to the awesome, publicly-available therapies he received through School District 196, we pursued additional speech and occupational therapy through our physician’s network. Again, we benefited from highly-qualified professionals who connected perfectly not only with Luke but as supports to our entire family. 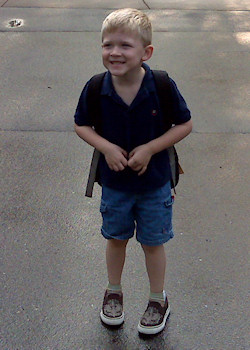 Today, Luke is doing great, in no small part because we live in one of the best neighborhoods in the country for early childhood identification of Autism Spectrum Disorders. We credit the district’s ESCE educational and occupational therapy for helping him to overcome many of the symptoms. He is now a first grader, he reads at grade level, and while he spends part of the day with specialists and has the assistance of a paraprofessional, he  also spends the majority of his day in a mainstream first grade classroom with 20-plus other kids, doing the same work, measured by the same standards.

Many families aren’t as lucky as we have been, since their areas don’t have as well-developed support systems for children on the autism spectrum. Recognizing this, and hoping for advances in understanding the causes and potential treatments for Autism Spectrum disorders, our family in 2008 did what many may wish to but never quite do – we participated in the Minnesota Walk for Autism Speaks. Trisa started a fund-raising walk team that she named “Luke’s Leaping Lizards”. Held at Canterbury Park, Luke observed the stadium and called the event “his race” and was convinced, when the Vikings Cheerleaders welcomed us off the track, that we had “won”. This past fall, at age 6, he again “raced” – taking off through the crowd at full-speed and not slowing down until he rounded the turn into the final straightaway.

We’ll be participating again this fall, on September 25. Contact me to make a donation in our team’s name, or join our team through Facebook or on the Autism Speaks website. We are, and always will be, Luke’s Leaping Lizards. It’s events like this that will help to give more kids the same chance as Luke has to share the same type of life as everyone else at a rewarding, independent future.

And finally, because I aim to put myself more on the line this year than ever before, I will be participating in the Autism 5K on May 15, 2010 at Lake Calhoun. Those of you who know me and my physical status will likely raise an eyebrow. Hopefully you will understand how important this is to me, and perhaps step outside your own comfort zone to do the same for the cause.